‘Good is the enemy of Great’. This is how the author sets off a riveting journey explaining the findings from his and his team’s half a decade of research in the conquest of how to make good companies great. Essentially, ‘Good to Great’ happens very rarely and it is because it is damn difficult. In his research, Jim Collins (the author), has found out systematic phases through which any great company goes through and lays out a framework as shown below:

The framework has got three main components:

2. Phases: There are three different phases in the ‘Good to Great’ journey.

Disciplined People: Involves getting the right leader and the right team

Disciplined Action: Creating a robust culture where the right people will work within the defined core values with the appropriate freedom

3. Flywheel: A quiet and deliberate process of figuring out what needs to be done for best future results and taking those step one by one, pushing the flywheel in a consistent direction until it achieves a breakthrough point.

Lets delve into each of these components into a little detail.

Research has shown that leaders who have brought the ‘Good to Great’ transformation are not the one’s who are charismatic or big personalities but are rather quiet, shy, deliberate. They are the one’s who have the combination of humility and professional will. Organisations that strive to become great need to have a Level 5 leader.

Author explains leadership in terms of 5 different levels (see above image) with Level 5 being the highest level in the hierarchy. Following are the traits of a Level 5 leader:

2. First who ..then what (Process stage: Buildup; Phase: Disciplined People)

It is a known fact that the right team is needed to achieve the success but what is even more important is to build the right team even before you know what and which path to take towards greatness and hence it is ‘first who..then what’. It is important to assemble a team of great people first and then decide on the strategy or vision for the company to make it great. The main reason is that when people join you for the strategy or the direction of the company then there is no guarantee that they will stick around or be equally motivated when the company changes its path. But those who are on the team because of someone else on the team will always be there to make the company great regardless of its direction. The author uses a phrase ‘getting right people on the bus AND getting wrong people off the bus’ and it is the ‘wrong people off the bus’ that is equally important. The only way to deliver to the people who are achieving is not to burden them with people who are not achieving.

Many companies adopt a ‘genius with thousand helpers’ model: where there is a genius & visionary leader who sets the strategy for the company and hires people to help achieve that vision/strategy. Author suggests this model most likely fails when that visionary departs and hence is not a sustainable one for making a company great.

It is also important to be rigorous in the people decisions. There are 3 practical ways:

When in doubt, do not hire

When you know you need to make a people change, act !

Put your best people on biggest opportunities, not on biggest problems

One of the important recipes towards becoming a great company is to make a series of good decisions and good decisions cannot be made unless you confront with brutal facts first.

Companies need to create a climate where the truth is heard. There is a difference between ‘having your say’ and ‘being heard of’. It is the ‘being heard of’ culture that enables companies to confront the brutal facts from their own people and then take appropriate right decisions.

Creating a climate where truth is heard: 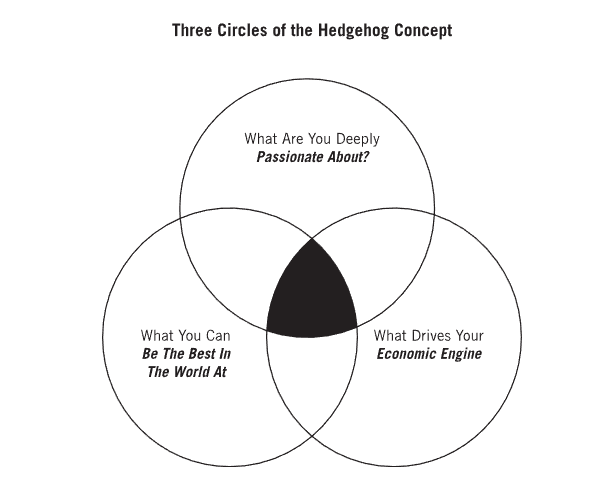 The three key dimensions (or three circles) which enable great companies to have deep understanding about themselves are:

What can you be the best in the world at ?

What drives your economic engine ?

What you are deeply passionate about ?

To understand the driver of your economic engine, it is important to know the ‘economic denominator’. It is the single most important ratio that has the single biggest impact to the company. Ask the question, if you were to pick only one ratio that would have the greatest impact, then what would that be ? This leads to great insight about the economics of the organisation and hence better decisions.

The last part of the three circles is having a deep understanding of what you are passionate about. Only when the companies indulge on things that they are really passionate about, they can produce results that exceed expectations. It is not always necessarily a passion about what you do as business but it can equally be about what you stand for as a business.

Now that you have a Level 5 leader, the right people on the bus, confronted brutal facts about you and business and gained deep understanding of your hedgehog concept, it is now time to create a culture that is self-disciplined to take actions within the desired framework of your hedgehog. A culture of discipline requires people to strongly adhere to the defined hedgehog concepts but at the same time provides much needed freedom to take disciplined actions within that framework.

Other thing that involved within culture of discipline is saying NO to all the opportunities that do not fit the hedgehog concept. There needs to be a fanatical adherence to hedgehog concept that requires companies to only focus on things that they have determined they can be best at.

The transformation from good to great does not happen with a pioneering technology but by realising the right technology and becoming a pioneer in the application of that technology. Good to great companies are motivated by inner compulsion of excellence for its own sake. They are not motivated by he fear of being left behind due to the technological changes because they know that after mindful thought and adherence to their core concepts will lead them to eventual success in technological transformation.

In conclusion, the research showed that all the Good to Great transformation happened with the consistent application of all the mentioned phases. It showed that great companies did not emerge due to a dramatic or a revolutionary event but rather years or decades of adhering to their core tenets, building up in the process, gaining momentum slowly as turn-by-turn of the flywheel and ultimately reaching an inflection point of breakthrough.

Disclaimer: This article is in no way to promote the book. I write book summaries as a way to grasp the key points of the books that I read and think that it could be beneficial for others who are limited in time.