How the best leaders make everyone smarter 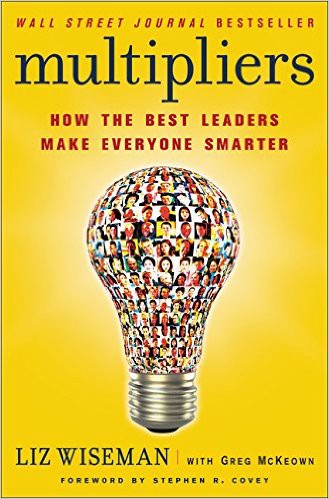 Wiseman draws on her 17 years’ experience as an exec at Oracle where she served as global leader of HR Development, and more recently leadership consulting to companies such as Apple, Disney, eBay/PayPal, Facebook, Google, Microsoft, Nike, Salesforce, and Twitter.

Multipliers is based on the premise that any leader can be placed on a spectrum between two categories — Multiplier and Diminisher — and investigates the behavioural traits of these two types.

In pondering the definitions, you may be drawn to think of particular leaders you’ve encountered yourself..

Multipliers amplify or multiply the intelligence of the people around them. They lead organisations or teams that are able to understand and solve hard problems rapidly, achieve their goals, and adapt and increase their capacity over time.

Diminishers drain the intelligence, energy and capability from the ones around them. They lead organisations or teams that operate in silos, find it hard to get things done, and — despite having smart people — seem unable to do what’s needed to reach their goals.

Multipliers don’t seek to do more with less, they look to more with more — using more of the under-utilised intelligence and capability in their teams without necessarily requiring additional headcount.

Wiseman identified Multipliers get on average 2x from their people. They’re genius makers — people actually get smarter around them.

The 5 Disciplines of a Multiplier

1. The Talent Magnet vs. the Empire Builder

Multipliers are often viewed as the best boss to work for. Everyone grows around them; “A players become A+”. They consider the role of the person at the top a genius maker rather than themselves a genius. As a result they attract the best talent through word of mouth.

Diminishers look to build teams of the best talent, but only to make themselves look good. Once within their team, talent is stunted.

The 4 practices of a Talent Magnet

Talent Magnets ignore org charts. They believe they can get anyone in an organisation to work for them if they can uncover the person’s genius.

Talent Magnets look for people that are smart in ways that can’t be measured through an IQ test:

Contrast with classic “intelligence” — the IQ test was originally developed by Alfred Binet on the assumption that lower intelligence signalled a need for more and different teaching, not the inability to learn.

What do people do exceptionally well, easily, and freely without condition? For these things they don’t necessarily need to be paid or rewarded, or often even asked.

People may not be aware of their own genius. “Fish discover water last”. Highlighting someone’s genius can help them develop further.

Although they removing blockers, Multipliers are not overprotective of their team such that they no longer have room to tackle their own problems and grow. “Nothing grows under a banyan tree”.

2. The Liberator vs. the Tyrant

Multipliers know people’s best thinking and work must be given, not taken. They liberate their team and create a safe environment for them to perform at their best, rather than operating a tyrannical rule that demotivates and closes people down.

Multipliers view the leader’s job as to put other people on stage, rather than take the stage themselves.

The 3 practices of a Liberator

Multipliers still place great demands on their teams, pushing them to achieve their best. But they do so in a way that creates safety and opens people up.

Multipliers are still hard-edged leaders — they’re typically not soft feel-good types. They create an environment that’s intense rather than tense.

3. The Challenger vs. the Know-it-all

The number 1 difference between a Nobel prize winner and others is not IQ or work ethic, but that they ask bigger questions. — Peter Drucker

Know-it-alls give directives that showcase how much they know. As a result they limit what their organisation can achieve to what they themselves know how to do. The organisation uses it’s energy to deduce what the boss thinks.

Challengers define opportunities that challenge people to go beyond what they know how to do. As a result they get an organisation that understands the challenge and has the focus and energy to take it on.

Multipliers don’t give answers. Rather, they provide just enough information to provoke thinking, and help people discover and see the opportunity for themselves. They initiate a process of discovery.

The 3 practices of a Challenger

Multipliers know that even when they have a clear view of the future, simply seeding the opportunities can result in bigger, better outcomes.

4. The Debate Maker vs. the Decision Maker

Diminishers make decisions solo or with a small group around them (their “inner circle”). They may decide efficiently with this small group, but leave the wider organisation in the dark to debate the soundness of the decision instead of executing it.

In this way, Diminishers under-utilise the intelligence around them, and leave the organisation spinning rather than executing.

Examples can be subtle, e.g.:

Multipliers first engage people in debate around decisions up front. They do this to achieve sound decisions, but also decisions that are understood and prepare the organisation to execute efficiently. Multipliers:

The 4 elements of a great debate

The 3 practices of a Debate Maker

Use the “shared inquiry” debate-leading technique:

5. The Investor vs. the Micromanager

Akin to how a coach doesn’t rush into the field and actually play for their team, a Multiplier avoids the temptation to jump in and solve problems for the team or take charge on the direction when things are going astray.

Diminishers approach execution by maintaining ownership, jumping in and out based on their level of interest in the project, and taking back responsibility for problems they’ve delegated. They belive if they don’t dive into the details and follow up, then other people won’t deliver. “People will never figure this out without me.”

Multipliers have the core belief that “people are smart and will figure things out”. They create truly autonomous organisations that can sustain performance without their direct involvement.

The 3 practices of an Investor

Multipliers do get involved in the operational details, but they do so in a way that maintains the ownership by other people.

The distinction between Multiplier and Diminisher exists across a spectrum; most people fall somewhere on the scale, and exhibit their own varying strengths and weaknesses across the 5 disciplines.

Some leaders discover themselves to be “Accidental Diminishers”, with good intentions let down by bad habits or influence from their surrounding environment, own boss, and/or peers.

Each discipline can be worked at, and it’s possible to evolve from a Diminisher to become a Multiplier.

To become a better Multiplier

If you try just one thing..