The phrase 'servant leadership' was coined by Robert K Greenleaf in his 1970 essay The Servant as a Leader. In this essay, Greenleaf sets out a number of ideals, values, and philosophies about putting people first.

As Greenleaf himself states, servant leaders are servants first- the ultimate team players whose actions and purpose extend beyond the needs and desires of their own and extends to their colleagues and partners. They understand that if the team is ultimately successful, that they too are successful.

The leap from servant to servant leader is a difficult one for many people, but comes from a desire to continue to serve at an elevated level of responsibility.Servant leaders don't lead for power, glory, or a plush corner office- they lead to make a bigger impact on their people and their organization. They lead with heart, empathy and authenticity.

Greenleaf's philosophy is a simple one. Rather than putting organizations’ leaders in the position of ultimate authority and power, the Servant Leader methodology is all about the sharing of power and control with those they are responsible for, and getting out of their way to allow them to be their best possible selves at work and at home.The Servant Leadership model promotes those who are servants first- people who have shown an interest to help others and be a part of a team rather than those who seek power and authority. 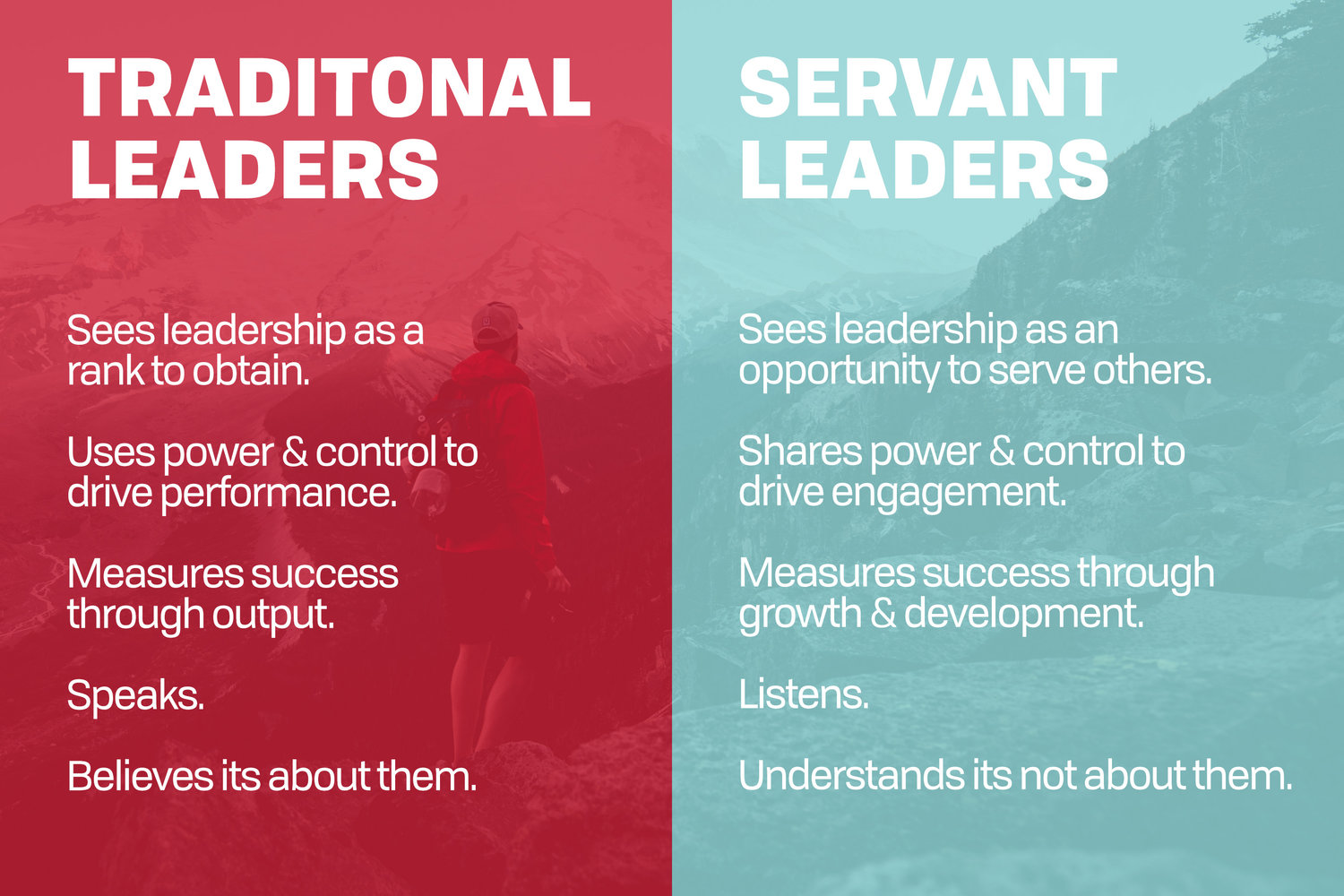 Servant leadership always empathizes, always accepts the person, but sometimes refuses to accept some of the person's effort or performance as good enough. - Robert K. Greenleaf

Serve Those Who Serve Your Customers And Clients.

Traditional models of leadership have the employee serving the leader, who directs them to serve the customer. Wouldn't it be better if your employees were being served by your leaders so that they can focus entirely on your clients and customers?

Organizations that implement the Servant Leadership model have re-wired the way that they look at leadership, and rather than designing a hierarchical approach to their resources, they've flattened their design so their leadership team is serving employees. This allows the employee team to focus their efforts on taking care of your clients, ultimately creating the best outcomes for your business- happy employees and very happy customers.

Jesus called them together and said, “You know that those who are regarded as rulers of the Gentiles lord it over them, and their high officials exercise authority over them. Not so with you. Instead, whoever wants to become great among you must be your servant, and whoever wants to be first must be servant of all. For even the Son of Man did not come to be served, but to serve, and to give his life as a ransom for many.”

You call me ‘Teacher’ and ‘Lord’, and rightly so, for that is what I am. Now that I, your Lord and Teacher, have washed your feet. I have set you an example that you should do as I have done for you.

“It begins with the natural feeling that one wants to serve, to serve first. Then conscious choice brings one to aspire to lead. That person is sharply different from one who is leader first, perhaps because of the need to assuage an unusual power drive or to acquire material possessions."

“The best leaders are clear. They continually light the way, and in the process, let each person know that what they do makes a difference. The best test as a leader is: Do those served grow as persons; do they become healthier, wiser, freer, more autonomous, more likely themselves to become leaders?”

“Leadership must first and foremost meet the needs of others.”

“A statement of vision is the overarching purpose, the big dream, the visionary concept-something presently out of reach-so stated that it excites the imagination and challenges people to work for something they do not yet know how to do.”

“Servant leadership always empathizes, always accepts the person, but sometimes refuses to accept some of the person's effort or performance as good enough.”

“Don't assume, because you are intelligent, able, and well-motivated, that you are open to communication, that you know how to listen.”

“The servant-leader is servant first... It begins with the natural feeling that one wants to serve, to serve first. Then conscious choice brings one to aspire to lead. That person is sharply different from one who is leader first...”

“One must not be afraid of a little silence. Some find silence awkward or oppressive. But a relaxed approach to dialogue will include the welcoming of some silence. It is often a devastating question to ask oneself, but it is sometimes important to ask it - 'In saying what I have in mind will I really improve on the silence?”

“Purpose and laughter are the twins that must not separate. Each is empty without the other.”

“On an important decision one rarely has 100% of the information needed for a good decision no matter how much one spends or how long one waits. And, if one waits too long, he has a different problem and has to start all over. This is the terrible dilemma of the hesitant decision maker.”

“Behind every great achievement is a dreamer of great dreams.”

“A Leader is one who ventures and takes the risks of going out ahead to show the way and whom others follow, voluntarily, because they are persuaded that the leader's path is the right one-for them, probably better than they could devise for themselves.”

“The only test of leadership is that somebody follows.”

“Love without laughter can be grim and oppressive. Laughter without love can be derisive and venomous. Together they make for greatness of spirit.”

“Even the frankest and bravest of subordinates do not talk with their boss the same way they talk with colleagues.”

“Faith is the choice of the nobler hypothesis.' Not the noblest, one never knows what that is. But the nobler, the best one can see when the choice is made.”

“Not much happens without a dream. And for something great to happen, there must be a great dream. Behind every great achievement is a dreamer of great dreams. Much more than a dreamer is required to bring it to reality; but the dream must be there first.”

“Where there is not community, trust, respect, ethical behavior are difficult for the young to learn and for the old to maintain.”

“For the person with creative potential there is no wholeness except in using it.”