A new study finds that people who drank lots of milk were more likely to have bone fractures and to die at younger ages than people who drank less than one glass per day. (Luis Sinco)
By Karen Kaplan contact the reporter Nutrition ResearchHuman BehaviorScientific ResearchHealthDiets and Dieting
Study: Drinking lots of milk did not protect against bone fractures and was linked with early death. 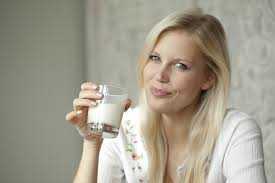 Got milk? If you’re drinking it to prevent bone fractures or to boost your overall health, you might want to go back to the fridge and opt for a yogurt or a slice of cheese instead.

A new study in the journal BMJ casts doubt on the widely held view that milk can help adults ward off hip fractures and broken bones. After tracking more than 100,000 Swedish men and women for up to 23 years, the study authors saw no link between milk consumption and fracture risk. However, they did find that avid milk drinkers were more likely to die at younger ages than their counterparts who drank little to no milk.

The Dietary Guidelines for Americans advise everyone over the age of 8 to consume three cups of milk per day or the corresponding amount of yogurt, cheese or other dairy products. Many European countries offer similar suggestions. After all, milk is a convenient source of calcium, vitamin D and phosphorus, three nutrients that are important for bone growth.

However, the researchers -- from the Uppsala University, the Karolinska Institute and the Swedish National Food Agency -- wondered whether this advice was scientifically valid. No randomized clinical trials have shown that drinking milk causes the risk of fractures or premature death to fall, and observational studies that might reveal an association between milk and better health have had mixed results.

The research team cited another reason for their skepticism: D-galactose. This is produced by the body as it breaks down lactose, the sugar in milk. Studies in animals have shown that chronic exposure to the nutrient causes “oxidative stress damage, chronic inflammation, neurodegeneration, decreased immune response, and gene transcriptional changes,” they wrote. In fact, when scientists want to mimic the effects of aging, they give animals shots or food containing D-galactose.

So the researchers turned to two large studies of Swedish adults. The Swedish Mammography Cohort included data on 61,433 women who answered questions about their diet between 1987 and 1990. Among them, 38,984 answered a more detailed diet survey in 1997. In addition, the Cohort of Swedish Men contained data on 45,339 men who completed a diet questionnaire in 1997. All of the study participants were tracked until death (as verified by Swedish health records) or until Dec. 31, 2010.

The results: Among the women, 17,252 suffered some type of fracture, including 4,259 who had a hip fracture. Drinking milk did not appear to reduce the risk; compared with women who drank less than one glass of milk per day, women who drank at least three glasses of milk per day were 16% more likely to have any fracture and 60% more likely to have a hip fracture.

The effects were smaller in men. Those who drank at least three glass of milk daily were 10% more likely to die during the course of the study than were men who drank less than one glass of milk per day. That was mainly due to a 16% increased risk of cardiovascular disease, the researchers found. Milk consumption seemed to have no bearing on the risk of cancer or fractures for men.

But what about yogurt, cheese and other fermented dairy products? Compared with milk, these foods have much less lactose. That’s because they are produced with Lactobaccillus bacteria, which eat the lactose and convert it into lactic acid.

With less lactose, these dairy foods produce less D-galactose. So if the researchers’ hunch about D-galactose were correct, yogurt, cheese, sour cream and buttermilk should have the beneficial effects frequently associated with milk.

Some of the volunteers in both studies gave urine samples, and researchers analyzed them to measure a biomarker called 8-iso PGF2 alpha, a measure of oxidative stress. For men and women, drinking more milk was associated with higher levels of this biomarker and eating more yogurt, sour cream and buttermilk was linked with lower levels. Cheese had no effect.

Some of the men also gave blood samples, allowing researchers to test for interleukin-6, a biomarker of inflammation. The researchers found that men who drank more milk had higher levels of this biomarker, and men who ate more yogurt and other fermented dairy products (besides cheese) had lower levels.

Among all of the women in the study, those who ate more of these fermented dairy foods had lower rates of fractures and premature death compared with women who ate less of them. Each additional serving corresponded with a 10% to 15% reduction in the risk of both, the researchers found. However, the effects for men were “more modest” or “non-existent,” according to the study.

The results certainly raise questions about dietary guidelines that encourage people to drink lots of milk. However, the researchers cautioned that it would be premature to pour your milk down the drain.

Long-term studies are needed to show that drinking lots of milk actually causes the health problems seen in this study, they wrote. Also, all of the study participants were of European descent, and the findings may not apply to people of other ethnic groups.

An editorial published alongside the study noted that countries in Europe and North America have both the highest levels of milk consumption in the world as well as higher rates of hip fractures and heart disease.

The author, C Mary Schooling, a public health epidemiologist at the City University of New York, also noted that the ability to digest milk as an adult arose several times in human history and appears to have an evolutionary advantage. However, she wrote, the benefits may help people live long enough to have children (and help this trait spread) but they might not help people survive into old age.

As living standards rise in countries around the world, milk drinking becomes more widespread, Schooling wrote. That means questions about possible milk-related health risks are important for a growing number of people.

“The role of milk in mortality needs to be established definitively now,” she concluded.